A sketch from the reelection campaign outlines one way a street might change to make it more enticing to avoid driving and better utilize the existing road space: Filled with traffic and parked cars now, it would be redesigned with greenery and park space at the side, a wide lane for biking and walking, and parking spaces on the other side would be replaced with trees and terraces for café tables and activities such as bike repair. Hidalgo wants to pedestrianize the city center, with vehicle access limited to residents, emergency vehicles, and a few other exceptions, as the next step in a long effort to reduce driving in the city. She wants to build even more bike lanes, calling for a “100% bike” city. (When she was elected in 2014, she promised to build 1,400 kilometers of bike paths by this year; as of December, the city has not hit the goal, but it has reached 1,000 kilometers of paths.) 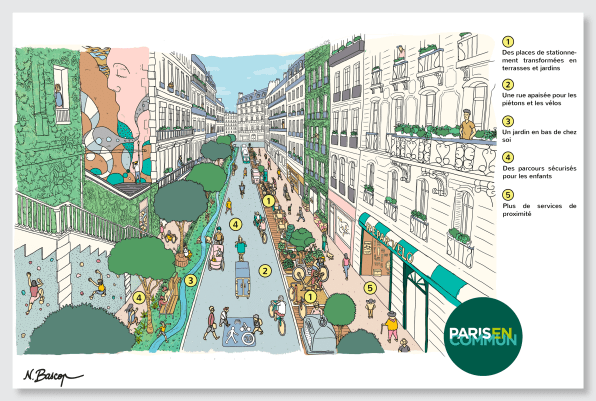