Sometimes an Archduke is just an arch duke… 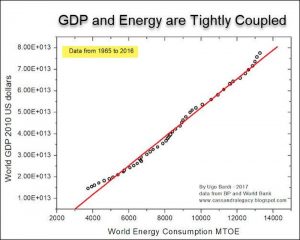 …Given the importance of oil, however, we should not be focused on merely its price, although that’s important, but also it’s availability.  Yes, shortages will lead to price spikes, and those will crush over-indebted countries, companies and individuals alike, but shortages will, by necessity, also lead to less economic activity.  Exactly how all that plays out is entirely unknowable.  Welcome to complexity theory which states that the behaviors of complex systems cannot be predicted.  They can be observed.  What actually happens are called emergent behaviors.

If a war with Iran breaks out, and the Strait of Hormuz gets closed down for any length of time (say, more than a month) there will be a shortage of oil that will lead to a price spike.  And a physical shortage.  How all that plays out in a world groaning under the weight of too much debt is unknowable, but it won’t be favorable.  Or pretty, or desired.

What happens to complex global, integrated, just-in-time delivery systems is also unknowable.  But it won’t be pretty.  We’ll just have to watch as supply chain disruptions spread though a complex universe of derivatives, 12% zombie companies, cov-lite loans, $4-trillion of emerging market dollar-denominated debt, already astonishing fiscal deficits, underfunded pensions and all the rest.

With the new attacks on two more oil tankers in the Gulf of Oman, and the US’s immediate blaming of Iran, there’s a much higher than acceptable risk of a very damaging war breaking out that will close the Strait of Hormuz.

The world is sitting on an enormous pile of debts and related IOUs.  One that could easily catch fire and burn with the slightest provocation.  While the central banks can print money, create the easiest financial conditions in decades, and constantly intervene in both word and deed in every financial market (which they do), the one thing they cannot do is print up more oil.

If the Strait of Hormuz gets shut down for any length of time that’s going to be a black swan event.  It will be unforeseen, have a large impact, and afterwards people will try to explain the resulting complexities in simplistic ways.