A great explanation and expose on American Empire failing. Got to love this.

Maduro wins the first round

The standoff between Venezuela and the AngloZionist Empire last week-end has clearly ended in what can only be called a total defeat for Elliott Abrams.  While we will never know what was initially planned by the demented minds of the Neocons, what we do know is that nothing critical happened: no invasion, not even any major false flag operation.  The most remarkable facet of the standoff is how little effect all the AngloZionist propaganda has had inside Venezuela. There were clashes, including some rather violent ones, across the border, but nothing much happened in the rest of the country.  Furthermore, while a few senior officers and a few soldiers did commit treason and joined forces with the enemy, the overwhelming majority of the Venezuelan military remained faithful to the Constitution.  Finally, it appears that Maduro and his ministers were successful in devising a strategy combining roadblocks, a concert on the Venezuelan side, and the minimal but effective use of riot police to keep the border closed.  Most remarkably, “unidentified snipers” did not appear to shoot at both sides (a favorite tactic of the Empire to justify its interventions).  I give the credit for this to whatever Venezuelan (or allied) units were in charge of counter-sniper operations along the border.

Outside Venezuela this first confrontation has also been a defeat for the Empire.  Not only did most countries worldwide not recognize the AngloZionist puppet, but the level of protest and opposition to what appeared to be the preparations for a possible invasion (or, at least, a military operation of some kind) was remarkably high, while the legacy corporate Ziomedia did what it always does (that is whatever the Empire wants it to do), the Internet and the blogosphere were overwhelmingly opposed to a direct US intervention.  This situation also created a great deal of internal political tensions in various Latin American countries whose public opinion remains strongly opposed to any form of US imperial control over Latin America.

Alas, there are still plenty of US puppet regimes in Latin America to mindlessly do whatever Uncle Shmuel wants them to (Colombia would be the worst offender, of course, but there are others).  But that is not the main problem here.

The main problem is that the Neocons cannot accept defeat and that they are likely to do what they always do, double down and make a bad situation even worse.  The head of the Russian Security Council, Nikolai Patrushev, has warned that the US has deployed special forces in Colombia and Puerto Rico in preparation for a possible invasion.  Uncharacteristically, the Russian Ministry of Foreign Affairs made intelligence information public, which described in some detail what kind of plans the Empire and its allies had, even before this past week-end’s confrontation.  See for yourself:

In fact, the leaders of the Empire and their puppets are not making any secrets about their determination to overthrow the constitutional government and replace it with the kind of comprador regime the US already imposed in Colombia.  Pompeo, Abrams and Pence have been particularly hysterical in their threats, but the entire “Lima Group” is still at it:

As for the Russian UN Ambassador, he was very clear on what Russia expects to happen next:

The Neocons are not even content to threaten Venezuela, and John Bolton could not help himself and publicly threatened Nicaragua as being next in line for a US-sponsored regime change.  He even spoke of a “Troika of Tyranny” reminiscent of the famous “Axis of Evil“.

This is all hardly surprising: US politicians always resort to infantile comic-book kind of language when they want to give their threats a special gravitas.  Next we will be told that Maduro is a “New Hitler” and that he is “genociding his own people”, possibly with chemical weapons (“highly likely”, no doubt!).  If not that, then Maduro will be distributing Viagra to his forces to help them rape more women.   To those puzzled by the fact that presumably adult politicians use the kind of language one could find in grade school, I can only say that this just reflects the state of the political discourse in the USA, which has been dumbed-down to an incredibly low level.  Be careful, however, because while US politicians are rather comical in their infantile, ignorant, illiteracy, and while they have an almost perfect record of embarrassing failures, the past decades have also shown that they are quite capable of murderous rampages (in Iraq alone the US invasion resulted in over one million dead Iraqi civilians) or of wrecking even a very prosperous country (which Libya under Muammar Gaddafi definitely was).

Next, the Empire will probably strike-back

There is a small chance that Abrams & Co. will conclude that the situation in Venezuela is a total mess and that the Empire cannot capitalize on it in the short to middle term.  This is possible, yes, but also highly unlikely. 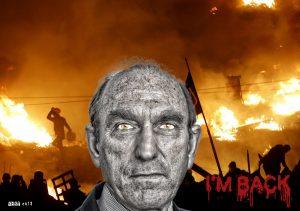 The truth is that Mr MAGA and his Neocon puppet-masters have failed, at least so far, at absolutely everything they tried. And if taking on China, Russia, Iran or even Syria is no easy task, Venezuela is by far the most fragile country in what could be called the “Resistance countries”: Venezuela is far away from it’s allies (except Cuba), it is surrounded by more or less hostile countries (especially Colombia), it’s economy is crippled by US sanctions and sabotage and its armed forces are dwarfed by the immense firepower the Empire has available in the region.  Add to this the truly demonic mindset of Neocons like Abrams and the future for Venezuela looks bleak.

The good news is that the Colombians and the rest of the Lima Group “friends of Venezuela” probably don’t have the military power to take on Venezuela by themselves.  The preferred option for the USA would be to use the Colombians like the KLA was used in Kosovo or how al-Qaeda (and derivatives) were used against Syria: as boots on the ground while the US provides airpower, electronic warfare capabilities, intelligence, bomb and missile strikes, etc. The US also has immense naval capabilities which could be used to assist (and, of course, direct) any military operations against Venezuela (I highly recommend this analysis by my friend Nat South who describes in some detail the US naval capabilities and operations in the region).

My gut feeling is that this approach will not work.  As is often the case, the US has all sorts of impressive capabilities except for the main one: a military force capable of providing the boots on the ground (as opposed to a non-US proxy).  The problem for the US military would not be so much getting in, as staying inside and getting something done before leaving – what the US called an “exit strategy”.  And here, there are really no good options for the US.

It is therefore far more likely that the US will use the weapon which it truly masters better than anybody else on earth: corruption.

There is big money, really big money, all around the Venezuelan crisis: not only oil money, but also drug money.  And there are a lot of truly evil and corrupt people involved in this struggle who will use that corruption-weapon with devastating effect against the constitutionally elected government.  And, just to make things worse, Venezuela is already devastated by corruption. Still, there are quite a few factors which might well save Venezuela from being reconquered by the Empire.

First, while US Neocons are too arrogant to bother with anybody’s opinion except their own, and while the various US agencies primarily talk with the immensely wealthy rulers of Colombia and the rest of Latin America, it does appear that a strong majority of Venezuelans support their elected government.  Furthermore, US leaders simply don’t understand how hated the “Yankees” are in Latin America (at least among the masses, not the comprador elites) and how fantastically offensive the appointment of a felon like Elliott Abrams as Envoy to Venezuela is to the vast majority of the people of this continent.

Second, Hugo Chavez and Nicolas Maduro did empower, for the very first time, the masses of the Venezuelan people, especially those who lived in abject poverty when Venezuela was still a US colony.  These people are under no illusion about what a Guaido regime would mean to them.  And while most of the supporters of Chavez and Maduro are not influential or wealthy, there are a lot of them and they will probably fight to prevent a complete reversal of all the achievements of the Bolivarian revolution.

Third, Latin America might well be changing, just like the Middle-East did.  Remember how, for years, the Israelis could attack their neighbors with quasi-total impunity and how poorly the Arab armies performed?  That suddenly changed when Hezbollah proved to the entire region and even the world, that the “Axis of Kindness” (USA, Israel, KSA) could be successfully defeated, even by a comparatively tiny resistance with no air force, no navy and very little armor.  As I never cease to repeat – wars are not won by firepower, but by willpower.  Oh sure, firepower helps, especially when you can fire from far away with no risk to yourself and your victim cannot fire back, but as soon as big firepower is met by big willpower the former rapidly fails.

There is a very real possibility that Venezuela might do for Latin America what the Ukraine did for Russia: act as a surprisingly effective “vaccine” against the AngloZionist propaganda.  An indigenous leader like Evo Morales, who has declared his full and total support for the elected government of Maduro, is an inspiration to the people of Latin America far beyond the borders of Bolivia.  The Russian ambassador to the UN got it right: there are already other leaders after Maduro which the AngloZionists want to eliminate and replace by a pliable puppet à la Guaido or Duque Márquez.  At the end of the day, this is a typical dialectical problem: the more brutal and overt the US aggression against Latin America is, the more successful coups or even invasions the US organizes, the stronger the anti-Yankee feelings generated among the people of the continent.  Think of it this way: the US has already terminally alienated the people of China, Russia and Iran, along with most of the Arab and Muslim world, and thanks to that alienation, the leaders of China, Russia and Iran have enjoyed the support of their people in their struggle against the AngloZionist Empire.  Could something very similar not already be happening in Latin America?