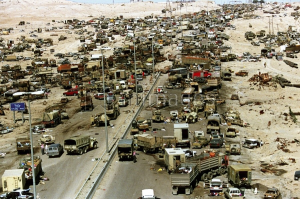 “The first reason why we bombed the highway coming north out of Kuwait is because there was a great deal of military equipment on that highway, and I had given orders to all my commanders that I wanted every piece of Iraqi equipment that we possibly could destroy. Secondly, this was not a bunch of innocent people just trying to make their way back across the border to Iraq. This was a bunch of rapists, murderers and thugs who had raped and pillaged downtown Kuwait City and now were trying to get out of the country before they were caught.”

Twenty five years ago, one of the most brutal massacres in war history occurred in Iraq, along Highway 80, about 32 km west of Kuwait city. On the night of February 26–27, 1991, thousands of Iraqi soldiers and civilians were retreating to Baghdad, after a ceasefire was announced, when President George Bush ordered his forces to slaughter the retreating Iraqi army. Fighter planes of the coalition forces swooped down upon the unarmed convoy and disabled the vehicles in the front, and at the rear, so that they couldn’t escape. Then wave after wave of aircraft pounded the trapped vehicles for hours on end. After the carnage was over, some 2,000 mangled Iraqi vehicles, and charred and dismembered bodies of tens of thousands of Iraqi soldiers lay for miles along what came to be known as the “Highway of Death”. Several hundred more littered along another road, Highway 8, that leads to Basra. The scenes of devastation on these two roads became some of the most recognizable images of the Gulf War.

more at Source: The Highway of Death | Amusing Planet