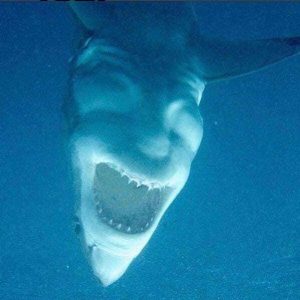 A photo of a shark from below. Everything not all as it seems.

Ask yourself: would you rather be considered courageous and stupid or cowardly and smart?

Sure, the ideal is courageous and smart, but that is rarely an option if you’re wanting to be courageous. Why is it rarely an option? Because doing the smart thing is usually safe and rarely courageous. Because to be considered courageous there needs to be some level of sacrifice involved. Because courage is usually predicated upon doing something where you are afraid, you are outnumbered, you are overwhelmed by the odds, or you are in some kind of danger.

Personally, I’d rather be considered courageous and stupid than be a coward sitting up in an ivory tower in my vain smartness judging through insecure hindsight bias. Because there’s a fine line between courage and stupidity, but it usually depends on the resulting social perception of the situation.

Think about it: imagine you are in a great battle defending your homeland from violent invaders. Everyone is afraid to confront the enemy, so you decide to courageously jump up and yell, “Today is a good day to die!” and you charge into the fray. If you win the day, you are considered courageous. But if you get shot right away, you are considered stupid.